Researchers from University of Copenhagen have developed a method to detect molecular leftovers from dangerous parasites that infect more than 250 million people globally. This could be an important tool in the battle against the debilitating disease known as schistosomiasis or snail fever. The study has just been published in the prestigious American Journal, Proceedings of the National Academy of Sciences (PNAS).

“Our research demonstrates that we are able to detect DNA-traces from the snail fever parasites by just taking a water sample from the places where people are at risk of getting infected when they bathe, wash clothes or fish”, says Mita Eva Sengupta. She developed the eDNA (environmental DNA) method to detect the parasites as part of her post-doctoral research at the Department of Veterinary and Animal Sciences, Faculty of Health and Medical Sciences, at the University of Copenhagen.

The parasite larvae infecting humans are released from certain types of freshwater snails and are so tiny that they are near invisible to the naked eye. With the new method, the researchers can detect the parasite’s presence directly in the water without finding the very tiny parasite larva itself. 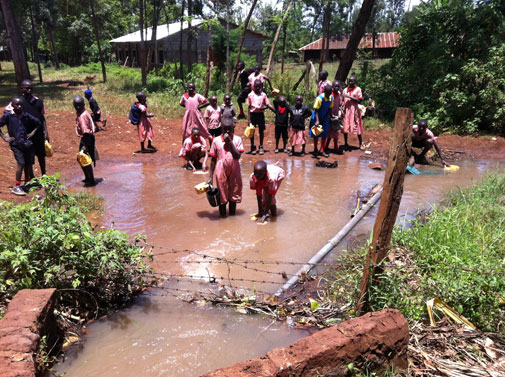 Schoolchildren in a Kenyan village collecting water but at the same time are at risk of getting infected with the parasite that causes schistosomiasis. The parasite larvae are released from freshwater snails and swims to find a suitable human host where they penetrate the skin. In the human bloodstream, it will feed and mate producing thousands of eggs that give rise to anaemia, tissue and organ damage and decreased learning abilities in children. The disease causes more than 200,000 deaths per year. Photo: ©Annette Olsen, Department of Veterinary and Animal Sciences, University of Copenhagen.

Mita Eva Sengupta explains: “This is a huge step toward improving the surveillance of this highly neglected parasitic disease. Up till now, the only way to identify parasite-polluted waters in tropical and sub-tropical areas has been to search for the freshwater snails that act as intermediate host and visually inspect them for parasite larvae. This is a very tedious and time-consuming affair that requires snail-experts”.

Together with Kenyan collaborators, the Danish researchers compared the new eDNA method with the traditional snail collection method in water bodies in areas in central Kenya where many people suffer from the disease. The following laboratory analyses showed that the eDNA method was able to detect parasites at more sites. 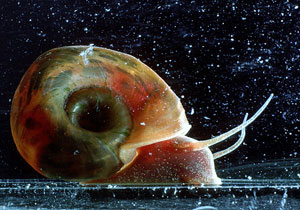 Parasite larvae being released (small white dots) into the water from the freshwater snail that acts as an intermediate host for the schistosomiasis parasite.  The parasites are now ready to infect humans. Photo: © DBL - Danish Bilharziasis Laboratory, Denmark.

Assistant professor Anna-Sofie Stensgaard from the Center for Macroecology, Evolution and Climate at University of Copenhagen, who is senior author on the publication:

“Compared to the traditional snail monitoring methods, the new method has the huge advantage that it can capture on-going transmission, even when very few infected humans and no infected snails are observed. This makes it an important tool in the on-going efforts to eliminate this parasitic disease from many places in the tropics. Since the disease recently has emerged in Corsica, this method could also be very useful for tracking disease spread into new areas outside the normal geographical range due to climate change and increased human migration.”

Despite decades of efforts to control this potentially deadly disease by the global health community, it remains widespread especially in poor and rural communities in tropical and subtropical areas where lack of safe water and inadequate sanitation enables the parasites to thrive in infested waters.

Professor M.D., Birgitte J. Vennervald from Department of Veterinary and Animal Sciences at University of Copenhagen, also senior author on the publication:

“One of the challenges that have hindered the elimination of this disease is that part of the life cycle takes place in freshwaters where people get infected repeatedly and pin-pointing exactly when and where the water is polluted with parasite larvae is difficult. Our research group was therefore inspired by Eske Willerslevs group at Centre for GeoGenetics at University of Copenhagen who had developed a method based on eDNA to monitor rare and elusive animals living in freshwater, and we envisioned that this method could possibly be used to detect the schistosome parasites as well.”

The next step for the research group is to test the method at larger scale in Africa, and to develop the method further to detect more species of parasites simultaneously in the water samples. This also includes the closely related Danish parasites which cause ‘swimmer’s itch’ in humans – a phenomenon that was particularly common in Danish lakes during last year’s hot summer.

The study is supported through grants from Augustinus Fonden and Knud Højgaards Fond.