Group of Brain Development and Disease

The research group of Brain Development and Disease is driven by a fascination of the mind and its matter. The group focuses on the mechanisms involved in neurodevelopment, systemic inflammation, and neurodegenerative diseases such as dementia and Alzheimer’s disease.

We apply methods such as single cell RNA sequencing to understand the cellular diversity of the part of the brain where Alzheimer’s disease first strikes called the entorhinal cortex. Single cell RNA sequencing data has enabled us to develop a novel neuron (brain) cell type from pluripotent stem cells using an approach called direct programming. These cells may provide clues as to why some cells in the brain are more vulnerable to disease than others. Uncovering the cellular diversity of the brain provides extraordinary insight into the complexity of this organ and provides us new evidence for the function and origins of brain diseases.

Our lab is also interested in the importance of the systemic immune environment, especially the gut, its microbiota and infections, and the role these have in the onset of neurodegenerative diseases.

Investigating development and the evolution of the Entorhinal Cortex: Ground zero for Alzheimer’s Disease. (Funded by Lundbeck Foundation)

The entorhinal cortex is a brain region that is important for processing memory and navigation. It is also the first region to be affected by Alzheimer’s disease.

In this project we are producing a cellular map of the entorhinal cortex showing neuronal spatial location, electrical activity and gene transcriptional profiles, by using state-of-the-art patch sequencing. We are also investigating sandwich lamination in the human entorhinal cortex and hope to uncover the mechanism involved.

In addition, we are studying the evolution of the spatial processing system across varying species to uncover key differences in memory and navigation at the single cell level and by using diffusion tensor imaging to demonstrate differences in connectivity of spatial processing systems to other brain regions. Together, this project aims to overturn textbook knowledge on how the brain's navigational system develops. It will provide detailed insight into the cellular map of the entorhinal cortex and how navigation and memory processing differs between species.

We are particularly interested in the role of the entorhinal cortex in Alzheimer’s disease and why it is one of the first regions of the brain that is affected by the disease. In this project, we have performed detailed investigation of the anatomical and molecular make-up of the entorhinal cortex using the developing pig brain and are using state-of-the-art single-cell RNA sequencing technology to discover more details on the stellate cell located in the entorhinal cortex and its role in the disease. The aim is to produce a stellate cell in the dish from human induced pluripotent stem cells and study why it is particularly susceptible in Alzheimer’s disease.

Funded by Innovation Foundation (Brainstem) and The Danish Council for Independent Research: Technology and Production

The cell is the fundamental unit in biology and thanks to technological advances, it is now possible to profile individual cells. However, to understand the function of complex tissues both in health and disease, it is necessary to (i) profile several aspects of each cell, (ii) understand its location, and (iii) understand functional cell-cell interactions.

In this project, we are developing a novel technology, SPAtIal CONnectomics (SpaiCon), which can process complex cellular information. We are doing so by combining the multiplexed error-robust fluorescence in situ hybridization (MERFISH) platform, for spatial transcriptomics profiling with multielectrode arrays for measuring electrophysiological activity. MERFISH characterizes gene expression in individual cells based on fluorescent probes and records the spatial location of transcripts from cell/tissue slices. Multielectrode arrays record and/or stimulate the electrical activity of cells at specific sites within a piece of tissue, making it possible to infer spatiotemporal dynamics. We are merging our diverse expertise from the fields of microelectronics, neuroscience and bioinformatics to create a novel platform that merges these technologies into a novel multi-omic technology. This project involves manufacturing and testing of custom built transparent multielectrode arrays that are compatible with MERFISH technology, thus generating a new computational workflow to merge and analyse the complex data.

SpaiCon will be transformative not only to neuroscience, but also to cardiology and other areas of biology as it will provide an unprecedented characterization of tissues. In particular, it will open up new possibilities for understanding how gene expression influences electrophysiological activity, and vice versa. We anticipate that SpaiCon will be of interest to researchers studying basic biology, tissue regeneration and vascularization and to translational researchers developing novel therapies for varying diseases.

This community based paper published in Nature Neuroscience voices the need to catalogue cellular diversity in the brain using a unified taxonomy including single cell transcriptomics and other data obtained from different approaches. https://www.nature.com/articles/s41593-020-0685-8

This study was the first to produce an in-vitro pig cell model of Alzheimer’s disease. Neural progenitors were studied for early phenotype of the disease and several mechanisms related to AD pathology could be seen.
Embryonic stem cell-derived radial glial cells from the APPsw transgenic pig show altered APP activity and tau splicing as well as perturbations in the cell cycle.

It is challenging to produce bona-fide iPSCs in the pig. In this study, we found a subpopulation of cells in pig fibroblasts that are reprogrammable, whilst other fibroblasts are not, suggesting that reprogramming success is critically dependent on the characteristics of the original cells.
Identification of SSEA-1 expressing enhanced reprogramming (SEER) cells in porcine embryonic fibroblasts.

We recently have created a novel pluripotent stem cell-derived model of the entorhinal cortex. Using a forward programming approach, we were able to overexpress 6 transcription factors in human induced pluripotent stem cells to produce stellate-cell like cells expressing Reelin. We anticipate this cellular model will be of use for studying early mechanisms in disease such as Alzheimer’s disease. We further characterize the developing and postnatal porcine medial entorhinal cortex using single cell RNA sequencing. In press at Frontiers in Cell and Developmental Biology 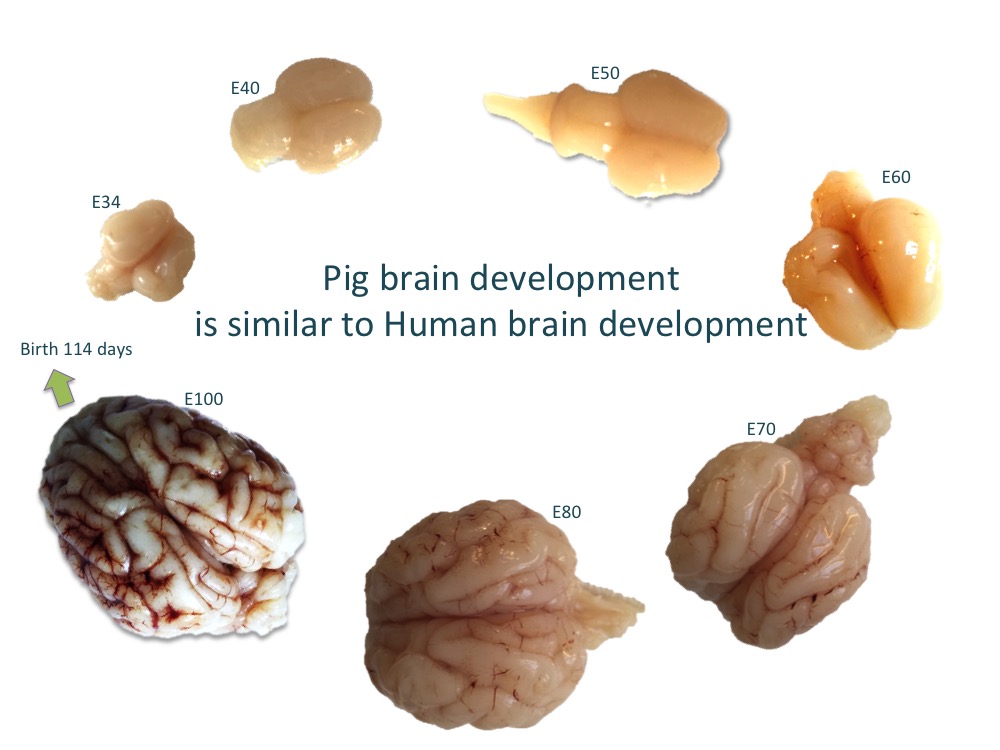